This supernova was the first to be observed by gravitational lenses, so complex calculations can be omitted. It is a type Ia supernova, which means that it has an almost perfect standard candlelight, since its absolute luminosity is very similar. Thanks to this we can know its distance to Earth.

Here you can read more information (it needs to be translated, because it is in Chinese).
Here are its spectra and chemical composition calculations. 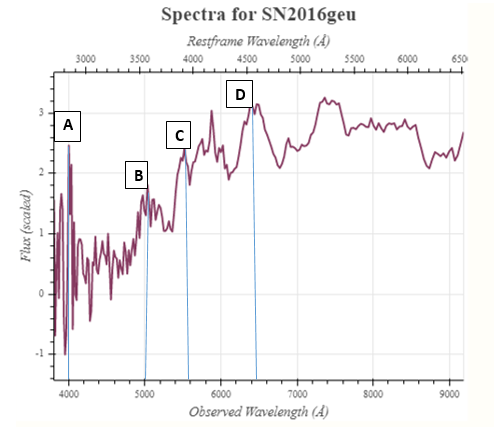 Peak A equals to Silicon

Peak B equals to Iron

We have to different peaks of silicon, so the total= %peakA+ %peakD

After doing all this research, I have looked up for other investigations made by scientists. I found this scientific article, where they compare SN 2016geu spectrum to other supernovas spectrum. In their spectra they recognize many metallic elements (such as calcium or copper, which I have not found or iron which I have found).
They also find the presence of silicon, which I have also found in my study (the element with the highest percentage).
I think that in general, my inquiries have not been very far from their, since although there are some elements that I have not known how to differentiate, there are others (the most abundant) that I have recognized.
This is the spectrum they made: