The so-called Saturn Nebula emerges from the darkness as a series of irregularly shaped bubbles, illuminated in glorious shades of blue and pink. The Saturn Nebula was originally a low-mass star that expanded into a red giant at the end of its life and began to release matter from its outermost layers.

This is the spectrum that I have studied: 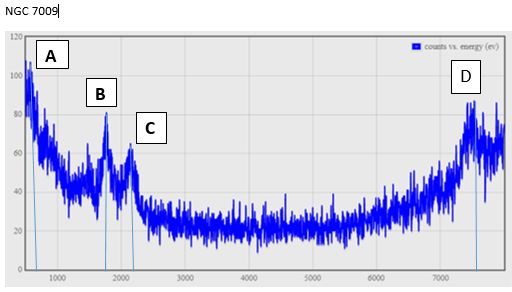 I've been investigating and I have found some interessant things.

First, in this article I discovered that in some nebulas (one of them NGC 7009) scientists have found Molecular Hydrogen Microstructures. That could be an explanation of the presence of H in my investigation.

On the other hand, here I read that the most important chemical elements are Oll, H, C and N. As I said before, I found H but I didn't find the rest of the elements.