Globular clusters are groupings of up to a million stars that revolve around the galactic centers. They are as old as the galaxies they orbit. They usually have sizes that range between 20 and 400 light years. The formation of globular clusters is one of the phenomena that we still do not understand too well, and it is not at all clear if the stars that end up composing a globular cluster are formed in a single generation, or over several generations. In most of the clusters that we know of, most of the stars are in the same phase of their stellar evolution, indicating that they had to form at the same time. 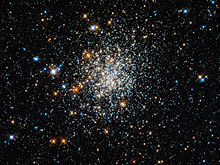