The celestial coordinate system works as the earth system, but the latitude and longitude are called declination and right ascension.

Right Ascension (AR) is represented by the Greek letter alpha (a) and that is measured from T to m (from the point of the vernal equinox) - Aries point - to the hour circle that passes through the star point m, marked with a thicker line in the figure. Right ascents are measured to the opposite side of the diurnal rotation of the celestial sphere in the limits of 0 to 24 hours in hourly measure. 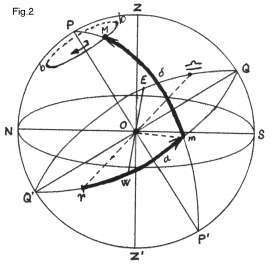